When crystallites are less than approximately 1,000 D in size, appreciable broadening in the x-ray diffraction lines will occur.  These regions may in fact correspond to the actual size of the particles. At other times, however, these regions form domains in the larger particle and may be a distinguishing and important feature. In either case, the observed line broadening can be used to estimate the average size.  In the simplest case where the particles are stress-free, the size is estimated from a single diffraction peak. But in those cases where stress may be present, a more robust method involving several diffraction peaks is required.

Figure 1 shows the X-ray diffraction pattern of nanocrystalline silicon which exhibits significant line broadening. Shown for comparison is the diffraction pattern from bulk Si with a particle size greater than 20 mm. Note that the Ka2  line is well resolved in the bulk sample, but indistinguishable in the n-Si case.  The extent of broadening is described by b, which is the full width at half maximum intensity of the peak.

After the value of b (in radians) is corrected for the instrumental contribution, it can be substituted into Scherrer’s equation:

The simple method based upon Scherrer’s formula described in Example 1 is only valid when the diffracting material is stress free. In those cases where both stress and particle size lead to broadening of the diffraction peaks, a more
comprehensive method must be used to separate the contributions.  The most common method of strain/size analysis utilizes the fact that the broadening from the two different sources have different angular relationships. For instance, the size broadening as described earlier has a 1/cos(Q ) relationship while the strain follows a tan(Q )
function. Finally, the instrument also contributes to the broadening. Thus, the total broadening bt  can be described by:

where ε is the strain and bo is the instrumental broadening. By a least squares method, the experimentally observed broadening of several peaks can be used to compute the average particle size D and the strain e simultaneously.  An example of this method is shown in Figure 2 for a nanoscale Al2O3/ZrO2 composite. After partial sintering, the broadening of each diffraction peak was measured and plotted as a function of the Bragg angle. From this data, it was possible to determine the strain and particle size for each phase:

This method can also be used to study many other phenomena such as stacking fault density and non-uniform deformation. 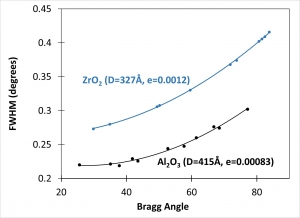 Figure 2.  Plot of the peak widths (FWHM) for Al2O3 and ZrO2 in a partially sintered composite at various diffraction angles. By use of a least squares fit, the particle size and strain can be computed.